1. When designing the PCB layout, the design principle of placing along the straight line of the signal should be fully observed, and the back and forth should be avoided as much as possible. 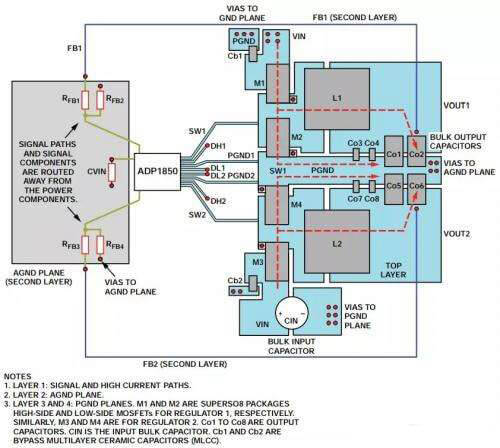 3. When multiple module circuits are placed on the same PCB, digital circuits and analog circuits, high-speed and low-speed circuits should be laid out separately.

5. When there are high, medium and low speed circuits on the circuit board, the layout principle in the figure below should be followed.

7. Energy storage and high-frequency filter capacitors should be placed near unit circuits or devices with large current changes (such as input and output terminals, fans and relays of power modules).

8. The presence of the storage capacitor can reduce the loop area of ​​the large current loop.

9. The filter circuit of the power input port of the circuit board should be placed close to the interface.

10. Avoid that the filtered lines are recoupled.

11. On the PCB, the filtering, protection, and isolation of the interface circuitry should be placed close to the interface.

13. Strong radiation devices such as crystals, crystal oscillators, relays, and switching power supplies are at least 1000 mils away from the single-board interface connectors.

14. The interference will be radiated directly outward or coupled out on the outgoing cable to radiate outward.

15. The filter capacitors for IC filtering should be placed as close as possible to the power supply pins of the chip.