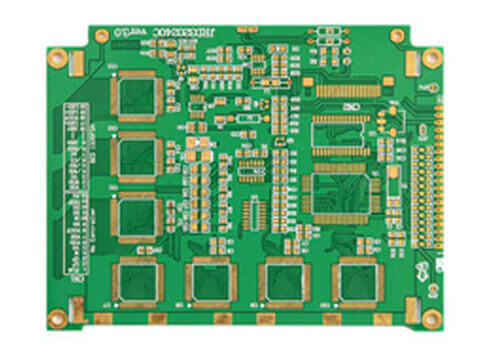 A single layer PCB is also known as single sided PCB. This type of Types of PCB is simple and most used PCB because these PCBs are easy to design and manufacture. One side of this PCB is coated with a layer of any conducting material. Generally, copper is used as conducting material for PCB, because copper has very good conducting characteristic. A layer of solder mask is used to protect PCB against oxidation followed by silk screen to mark out all of the components on the PCB. In this Types of PCB, only one side of the PCB is used to connect different types of electrical or electronics components like resistor, capacitor, inductor, etc. These components are soldered. These PCBs are used in low cost and bulk manufacturing application like calculators, radio, printers and the solid-state drive.Types of PCB

Double layer PCB is also known as double sided PCB. As name suggests, in this type of PCB, a thin layer of conducting material, like copper is applied to both top and bottom sides of the board. In PCB, on different layer of board, consist via, which has two pads in corresponding position on different layers. These are electrically connected by a hole through the board, which is shown in figure-2b. More flexible, relatively lower cost, and most important advantage of this type of PCB board is its reduced size which makes circuit compact.  type of PCB is mostly used in industrial controls, converter, UPS system, HVAC application, Phone, Amplifier and Power monitoring systems.Types of PCB

Multilayer PCB has more than two layers. That means PCB has at least three conductive layers of copper. For securing the board glue is sandwiched between the layer of insulation which ensures that the excess heat will not damage any component of circuit. This type PCB designing is very complex and used in very complicated and large electrical task in very low space and compact circuit. This type of PCB is used in large application like GPS technology, satellite system, medical equipment, file server and data storage.Types of PCB

Combination of Flexible circuit and rigid circuit is most important board. Flex-rigid boards consists of multiple layers of flexible PCB attached to a number of rigid PCB layer. Flex-rigid board is as shown in figure. It is used in cell phones, digital cameras and automobiles etc.Types of PCB